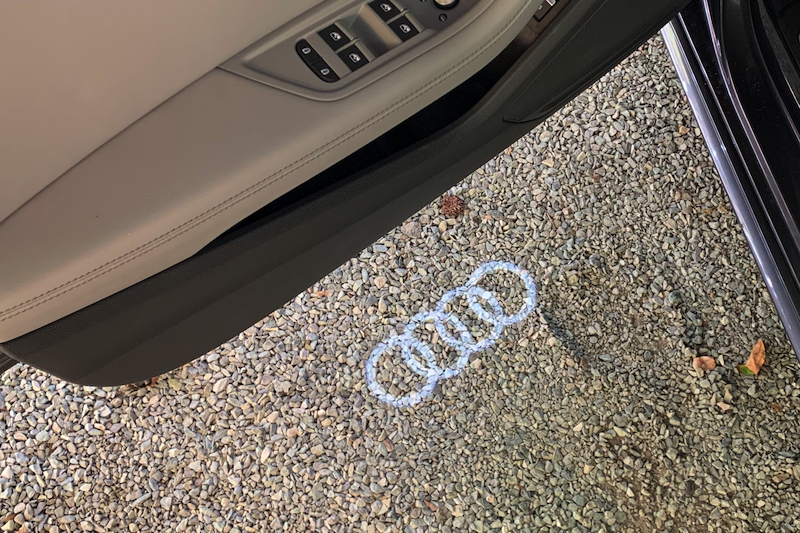 When the car was in the shop, I got a loaner1 to drive while they were working on my baby. Those loaner cars don’t have a lot of “boxes checked” in the features list. But Audi still saw fit to spend their own money on the Audi Rings Projector feature. Which is pretty much the silliest, most worthless, feature any car can have.

TL;DR: I hated this car:

Which isn’t to say the 2022 A4 isn’t a nice car. I should state that before I get into why this ins’t a car and feature list I’ll ever buy. Once I found a way to get into the damn thing, it drove well enough. Stopped well enough. Rode well enough. The seat was comfortable, even tho I think it was the sport seat. The A/C controls are still buttons and knobs you can feel around for without having to look at them.

If I don’t have a rant about where automakers put the “B” pillars2 in cars these days, I really should. Even if I wasn’t fat as hell and was just tall I wouldn’t be able to get in and out of most modern cars. I couldn’t move the steering wheel far enough out of the way to get in and out with any grace at all.

I guess my main complaint about the So-Called Drivers Assistance is just how distracting it was. I found myself looking at the dash every time it showed me getting close to a lane marker. Not sure how constantly distracting the driver is supposed to help make things safer. I never found a way to turn it off completely, or for more than just until the car was turned off. I never found a way to make it take up less of the driver’s display either.

The lane keeping feature actually fought with me. I started a lane change and the car turned the wheel the other way, causing me to lose my grip. It took a good amount of force to make it change lanes. I learned after a while that signaling the lane change told the car it was okay to drift over the middle line. But until I did it could be a fight. I feel no need to signal a lane change to cars a mile ahead or behind me, and I certainly feel no need to signal to the fucking car that I’m changing lanes. Forntuately, you don’t have to buy this feature. And I won’t.

When the car was started, it came up with a “Privacy Notice” on the display screen, and if it goes away on it’s own it doesn’t inside of 10 minutes. Again, distracting.

I wish I could like the automatic stop-start of the engine when at a full stop at traffic lights and stop signs. Cars start up pretty easily these days, even when cold. Electronic engine controls and fuel injection are wonders of technology. But hearing the engine start every time you lift off the break to creep forward is a minor attention grabber. You have to lift off the break completely to do that. That this feature grabs any attention at all, isn’t good.

No I wouldn’t buy this car, but that’s because it is too small to start with. Any car this size that has 4 doors needs to be re-thought.

Maybe a good car for some people, but not for me. YMMV